The gallery’s heritage listed 1950s air reticulation system, visible in these photos as two massive ceiling mounted steel tubes, emits a constant but changing low frequency hum, with an occasional subliminal clatter. It is akin to the more contemporary sound of refrigerated airconditioning systems which permeates inner city environment but is more or less inaudible because of the insistent drone of vehicular traffic. Very late at night when the traffic disappears, some precincts in the National Capital become echoing canyons drenched with aircon pink noise. Nevertheless, airconditioner noise is normally filtered out of our conscious awareness, it is an “insignificant” sound. In this installation I attached contact microphones to the ceiling tubes, and broadcast the amplified signal out through three enormous speaker enclosures which took on a kind of abstract architectural presence. In effect the work raised the “sound floor” of the space to a point just below where it would collapse into feedback. Since the sound was simply the ambience folded back in on itself, it was possible to not notice anything at all, unless you moved closer to the speakers, at which point you might realise you were listening to the sound of your artificial surroundings. The sound of nothing much happening, or a lot, depending on your perspective. 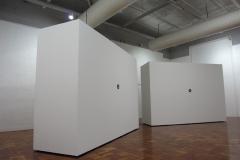 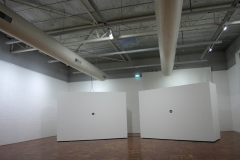 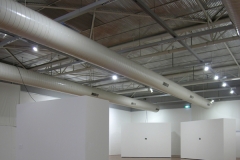 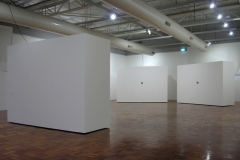 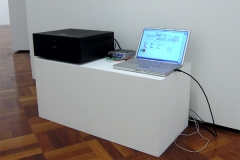