“Amongst other things, you are listening to a complex unchanging chord made from 56 sine tones; harmonics of the gallery’s resonant frequencies, determined by the distances between the walls, floor and ceiling of the space. In a room as large as this the fundamental resonances are sub-audible, below what is commonly accepted as the threshold of human hearing. Nevertheless they can have an effect on your emotions, and contribute to what might be called the feeling of the space.

The tone cluster is being generated in MAXMSP5 and delivered through a four way monaural sound system – each of the four speakers is independently presenting 14 of the 56 tones – there is no mixing of tones between channels inside the piece like there is with stereo sound, the mixing happens in the space of the gallery and in the bodies/minds of those listening. I’ve attempted to ensure that each of the 56 tones can be heard equally, by progressively boosting the volumes of the highest and lowest frequencies to compensate for the way our ears are less sensitive in those parts of the range.

But of course the relative loudness of the tones will depend on your own sensitivities, your levels of interest and concentration, how far you are from the speakers, the surfaces from which the sound is reflected, and the extent to which the natural resonances of the space are being activated by external sounds. In a sense it’s impossible to hear the sound coming out of any one of the speakers – you can only hear what your position in the space presents to you, it will always be a mix, and it will change as you move around. Even the centre of the space where the speakers are symmetrical around you isn’t a privileged position; it doesn’t reveal any truth about the work and it doesn’t embody an ideal. Unlike stereo reproductions there is no “sweet spot”, because there is no illusion of space to be created or evoked. The work, and the space it occupies, simply share a set of numbers, a primitive data set, which allows one to be read in terms of the other. The work embodies a set of relationships which is modulated differently by everyone who experiences it. And it acquires an emergent temporality through this process which is unknowable and unpredictable and entirely local. Although we can speak about it as a singular thing it is experienced differently by everyone in the space, which might be a banal observation since this is the case with everything that can be perceived, discussed and acted upon within the limited range of our sensibilities and proclivities. Nevertheless, it’s the ramifications of this phenomenon which govern the emergence of culture, and the convoluted turbulent becoming we experience as the real.” 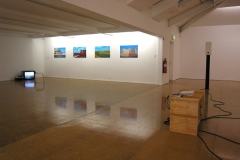 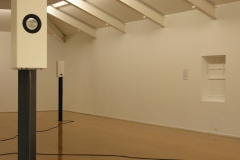 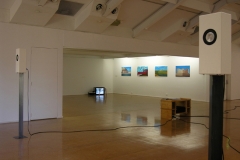 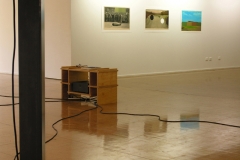 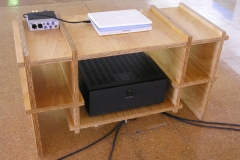