By Stuart Koop.
a review of untitled series 1990, exhibited at the Victorian Centre for Photography during 1992.
First published in Agenda # 20/21 January 1992. 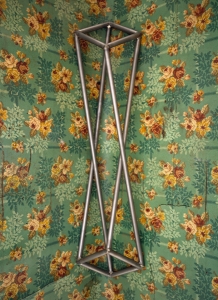 In apparent homage, Chris Fortescue constructs photographic mise-en-scene or tableaux which conform to some of the more exemplary optical illusions within psychology: Schroder’s reversible staircase and Thiery’s contrary perspective figure; the Ponzo illusion; the impossible figures of Penrose and Penrose; and many more [1]. As with most optical illusions, the viewer is encouraged to respond to contradictory visual cues which manifest a visual paradox, in this case achieved by the peculiar, distorted form of the subject matter in its photographic representation.

The illusion in Fortescue’s work, shown recently at the Victorian Centre for Photography, is in the association of photography with a rationalised system of representation (a system which approximates the laws of perception through perspective and composition and which in fact may function with as much veracity in painting as in photography). In Fortescue’s Cibachromes, this association leads to an error in our perception of contradictory forms and spaces and is perhaps a subtle critique of the originary role accorded photography within the visual arts. As Pierre Francastel observes:

“Photography . . . has made visible not the real character of traditional vision but, on the contrary, its systematic character” [2]

It becomes possible, then, to dissociate the system from the practice of photography by identifying conventions derived from its social use or function, and to subvert the expectations which accompany those conventions.

But perhaps Fortescue’s photographs have more in common with M. C. Escher than Rodchenko. The radical import of Escher’s art lies in forcing the viewer to acknowledge the limits of a system of representation by observing its dysfunction within the image. The illusion first involves the viewer’s affirmation of certain laws and principles by which things appear, and secondly the realisation that such laws are arbitrary and falsifiable within a system of representation. In Rethinking Art History, Donald Preziosi compares the development of the discipline of art history to a Necker Cube, an optical illusion much touted by the psychologists of perception in which a skeletal cube presents itself in alternating aspects according to the vagaries of perception. This is just one of various ‘machines’ which Preziosi cites as embodying (in their specific function) changes in attitudes towards representation and perception (among them Bentham’s panopticon and Camillo’s Memory Theatre).”The discursive space of art history is . . . a contradictory, illusory, or imaginative space, precisely like a Necker Cube illusion in which alternate perspectival logics co exist within the same object. And each of the objects in the disciplinary analytic theatre invariably becomes, itself, a temple of entelechy.” [3]

According to Preziosi, the illusion encapsulates the two contradictory assumptions upon which the discipline of art history is predicated: that art retains some connection with the real world via its descriptive function (as a language of representation); and that it is, at the same time, an autonomous code in its own right. The function of the optical illusion within art depends on the curious orientation of the discipline towards this paradoxical foundation.

Since an optical illusion presupposes the conscious manipulation of means to bring about the occasion of error, what is represented becomes a part of those means. Everything appears as if the means were laid bare for all to see. Fortescue, as the illusionist, stands outside the conventional or accepted use of photography to represent the world. Like a conjurer he must disappear, or appear incidental to the deception. This is the case within psychology, as in magic, where the illusion is presented objectively, totally resigned from artifice, only to reappear after the deception as indeed belonging to the perpetrator: Necker, for example.

If we consider Fortescue’s photographs in terms of his project description, his absence becomes more apparent, more telling. In this series of prints, the recognition of certain objects, surfaces and spaces is rendered erroneous, that is, in relation to their cognition.
The prefix ‘re’ here signifies the occasion of error. ‘Re’, used as a living prefix can be attached to almost any simple verb to derive a transitive verb, noun, adjective, past participle, etc. The use of the hyphen is instructive. It indicates that the author is not employing a compound verb straightforwardly but insinuating a slightly different meaning, however, commensurate with either of the two formal senses of the prefix: once more, again; or back to, a return to [4].

Fortescue states:
“These images result from a project which seeks to occupy a position where perception and the language of representation intersect.” [5]
Fortescue proposes photography as a means of recognition (and as a language of representation) while perception is a means of cognition. The point or plane of their intersection is meant to ‘vibrate’ and ‘resonate’, ‘poise(d) between possibilities’. I would suggest that the said intersection would be occupied by a hyphen in the word ‘re-cognition’. The hyphen achieves this effect as the sign of intention and purpose. However its absence in Fortescue’s account refers instead to a precondition for the practice of a deception; the neutrality of means and the artist’s temporary concealment.
The difference between cognition and recognition (precisely the space either filled by the hyphen or evacuated when when this difference appears to be a ‘natural’ one) or between perception and photography, can thus be enumerated ad infinitum in the terms of an error or illusion associated with a ‘repetition’ or ‘a return’ which the prefix draws into circulation around the primary term ‘cognition’. But the illusion remains uncorrected and the artist’s stagecraft remains undisclosed. [6]

The work seems to require some other sign of intention commensurate with the degree of manipulation involved. We might find this in the particular method of presentation (unique to Fortescue, developed in association with the patent holder) which encases the print in a thick layer of acrylic, akin to laminating although the final result is a solid plastic volume. If there is little acknowledgement of the artist’s intervention either at the level of rhetoric or image, then certainly the encasing of the images in this way corresponds in form to the conjuror’s art; the trick-in-a-box. This might seem incidental but our physical relation to the less inert photographic image works to reinforce its transience. Instead, Fortescue’s photography is talismanic. It attempts to arrest a moment in time between intrigue and realisation regarding what we see and how we see it and make of it an object (not an image) forever working its illusory wonders within a real, palpable space. This is far different from Cartier Bresson’s infamous ‘moment’ since in Fortescue’s photographs our gaze never returns to us a resolved reflection upon the world but is endlessly relayed along axes and between nodal points comprising the illusion; caught up in a ‘repetition’ or ‘return’ which is perpetual. Thus the work is not pictorial but mechanical and its object status reflects the artist’s position outside the photographic process and out of our immediate view.

But there is no skullduggery in need of being exposed, nor any hegemony at work in these conventions. Rather the illusion curiously reaffirms the potential of a ‘language of representation’ to transform reality as if by magic, exploiting its imprecise form and grammar in seemingly profound ways.

[1] For a detailed account of these illusions and their development see J. O. Robinson, The Psychology of Visual Illusion, Hutchinson University Library, London, 1972.
[2] Francastel, P., Peintre et Societe, Audin Lyon, 1951, p47. Quoted in Pierre Bourdieu et al, Photography: A Middle-brow Art, Polity Press, London, 1990, p74 (translated by Shaun Whiteside).
[3] Preziosi, D., Rethinking Art History, Yale University Press, New Haven, 1989, p86.
[4] This ambivalent relation to any given verb (or term) might explain the number of ‘re-‘ words in currency. For if we extrapolate from the use of certain terms qualified in this way to a theoretical context which, perhaps, overdetermines the use of the words, we observe the prefix conforming to the outline of a number of theories and, in fact, performing an abbreviation of considerable literature. This does not recommend the prefix but indicates the dependence of the author on the simplification it brings about (multiplying meanings exponentially) and the complicity of the reader who is required to make some sense, a sense, of the term.
[5] Fortescue’s comments are taken from an artist’s statement accompanying the exhibition.
[6] An interesting counterpoint to Fortescue’s work, which might differentiate the disciplines of psychology and art, are two photographs of a wooden construction of Penrose and Penrose’s ‘impossible triangle’ (1958), in which the apex appears to be formed by one receding side and another extending forward. In one photograph it appears an impossible object while in the other, taken from a different aspect, the particular construction of the form which makes the illusion possible is exposed; it is not a complete triangle at all, simply the manipulation of depth of field which makes it appear so.